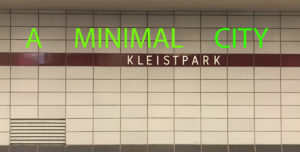 In 2019, A trans will deal with the theme A Minimal City and invites you to view several artistic positions. A Minimal City opens up a zone to think about what could be the lowest common (i.e. – minimal) denominator to the topic of urbanity and cities from an artistic and architectural point of view.

What makes a city become a city? What is the difference between it and the periphery, landscape, or nature? Where do they separate and where do they melt together? Are the differences noticeable, existential, or only minimal? Are these categorizations even still comprehensible?

The concept of minimal art started in the United States in the early 1960’s as a counter-current to the European art movements of the time. ABC art, as it was sometimes called, aspired to a deliberate simplicity. Objectivity, clarity, as well as serial and industrial production created its own sense of order. Related terms such as downshifting, minimal effect, simplicity, or fractional are today reflected by the city and its residents. Current trends and counter-movements bring “emptiness and fullness” back into the discourse.

The new A trans space is a simple glass cabinet in a normal Berlin subway station. The protagonists are invited to present, quite literally, “stopping points” for passersby, passing trains, and visitors to the station to reflect upon. After it’s start in Vitrine 01, U-Birkenstrasse, A trans has shifted to U-Kleistpark, Schöneberg.

The other collaboration will be with: